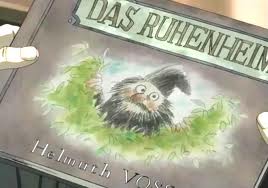 Das Ruhenheim or A Peaceful Home, is one of the picture books authored and illustrated by Franz Bonaparta.

Das Ruhenheim was written and published in 1989 by Franz Bonaparta under the pen name Helmuth Voss.  According to Tomas Zobak, his story and illustration in this story is quite different from his usual storyline and illustrations.  However, Zobak is still able to discern this as the work of some Czech picture book writer Emil Sebe, who is also Bonaparta.  It is like a change in perspective, according to him.

It is about a man who comes to a town to rob the place but decides not to after the villagers treat him kindly and he moves there.

Community content is available under CC-BY-SA unless otherwise noted.
Advertisement