Zweifelstadt is a made-up city located in Niedersachsen, best known for being the site of a massacre in 1958.

Zweifelstadt was a peaceful, quiet village much like Ruhenheim. The town had a small population, so the majority of the villagers were acquainted with one another. According to Thomas Dietrich, all the residents had similar living circumstances and mentalities, which was likely one of the reasons it was targeted.

One day in 1958, there was a gang dispute over a card game, resulting in a man being shot to death with a hunting rifle. The media published gruesome photos of the victim's corpse and the local police were resistant to elaborate on the motive of the murder, so the citizens began speculating and spreading rumors. Ultimately, the townspeople convinced themselves that a psychotic serial killer was responsible for it all and was still on the loose.

A man known by the name of Peter Bock noticed that his neighbor, Michael Oswalt, was in possession of a hunting rifle similar to the one used in the recent murder. He mentioned his observation to a few friends and business associates, and before he knew it the rumor had reached the ears of everyone in town aside from Oswalt. Volk Rogner, an auto mechanic, grew paranoid and shot his neighbor, whom he believed to be Oswalt, dead with a handgun.

The gunshot echoed through the town, causing the pent-up madness to release at an exponential rate. Before long, Bock killed Oswalt, Oswalt's wife killed Bock, and the entire town fell into ruin; houses were being burned, anyone within viewing range was shot without hesitation by their friends or family, and the population was obliterated by morning.

Later investigations dug up some chilling information about the true roots of the incident. It was reported that a week before the massacre ensued, a graduate student apparently studying folklore was staying in the village. Having heard the rumor about Oswalt, he made sure all the households he visited while taking ethnological surveys were aware of it. Furthermore, it was also learned that he was at Rogner's home the morning of the massacre, reportedly informing him that Oswalt was to be coming over later that day.

The only two survivors of the massacre were the owners of a bed and breakfast the young man stayed at; they claimed he told them the day before the incident that something horrible was going to happen and that they must not go outside.

Upon further examination, investigators discovered that no such man had ever officially come to the town. Theories were formulated that the massacre was an experiment organized by East Germany.

In his 1960 book The Eyes of Others, The Hatred of Others, Thomas Dietrich analyzed the events that took place in Zweifelstadt. He theorized that the main cause of the madness was the underlying tension of hate within friendship. In the case of Zweifelstadt, the townspeople all lead similar lives: the same economic situations, houses, cars, hobbies... And it was because of this precise equality that the desperate strive for individuality rose. Thus when the neighbors began comparing each other, desiring the prove they were better than one another but could not, the "good mornings" served only to cover up malicious intent. In retrospect, Dietrich's theory was that the town was a disaster waiting to happen; the young man simply added the fuel to the fire, a method similar to what Johan does.

Although the precise details of the massacre are only included in Another Monster, it is briefly mentioned by Heinrich Lunge in chapter 147 when he is speaking with Wolfgang Grimmer on the outskirts of Ruhenheim. 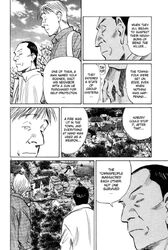 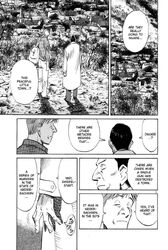 There is some confusion among "Monster" fans about the reality of this town, as some Wikipedia pages have it listed as an event. The city "Zweifelstadt" does not exist, nor do there appear to be any known massacres in 1958 resembling its downfall.

However, just as the Kinderheim 511 experiments bear parallels to real events, there may be incidents it was based off of. Notably, the 1951 outburst of insanity in the French town Pont-Saint-Esprit occurred within the same decade and holds the notion of an entire city going insane, though the potential causes and fatality rates are very different.

The German word "zweifel" translates into English as "doubt", and "stadt" is "city", so Zweifelstadt literally means "Doubt City", accurately corresponding with the events that took place there.

Community content is available under CC-BY-SA unless otherwise noted.
Advertisement